Your company needs a phone system that not only matches your current business requirements, but can scale as your communication needs grow.

Successful businesses are constantly on the move: growing, adding locations, hiring new employees. Because your phone system has such an impact on your day-to-day - from budgets to employee productivity to customer care - it should scale with your company.

Don’t invest your time, budget, and energy into deploying one system only to have to upgrade to another later. Choosing the right system from the start saves resources and multiplies opportunities for greater collaboration and productivity.

We offer a range of Unified Communications & Cloud services which includes our cloud-based phone system (VoIP/Hosted PBX), SIP Trunking and so much more.

The market offers many phone system models designed for enterprises. But most companies require a modern phone system that functions more as an asset than a utility. These asset phone systems are: 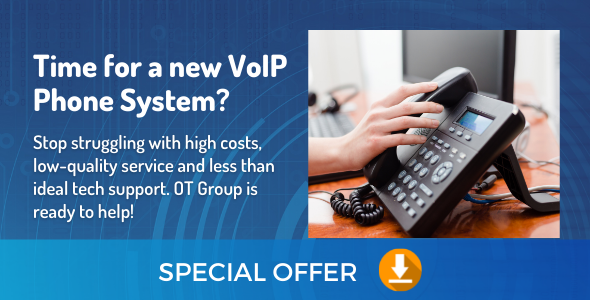 What is Hosted VoIP?

Voice over Internet Protocol (VoIP) is a cloud-based phone system that allows you to make phone calls at any time, from any place using a computer with a headset, your mobile device with an app, or a traditional desk phone and a VoIP service.

VoIP converts your voice into a digital signal, allowing you to make calls directly from a computer, VoIP phone or any other data-driven device. Rather than through a phone line, VoIP is a phone service that is delivered over the internet.

On-site installed phone systems that connect through VoIP run through your company’s infrastructure and connect to the public switched telephone network (PSTN) or a VoIP service. This means that you would be completely responsible for installing, updating, managing and maintaining the phone system yourself.

Hosted VoIP, which is another term for hosted PBX, however, is managed by the VoIP provider. That means the VoIP provider maintains and manages all of the equipment, services and servers associated with any hosted VoIP phone system.

Hosted VoIP is operated entirely through the internet, with an assigned phone number that can be accessed from anywhere in the world. As long as you have an internet connection, you will be able to make calls from the same phone number.

By the end of this year, the typical IT department will maintain less than half of its platforms (40 percent*) on-site, with the rest residing in the cloud. This includes their communications platforms. In the past, traditional on-premises platforms were seen as mere utilities, a checkbox enterprise had to mark off. These systems also presented a host of challenges. In the beginning, they required heavy investments in hardware and took time to deploy and configure. Once they were in place, it didn’t take long before they became obsolete, isolating enterprises from recent updates and features. As they reached their end of life, these systems increasingly monopolized IT resources to keep them functional.

On-site VoIP offers similar risks, as does a hybrid cloud. Only Hosted VoIP offloads the inherent risk of tech investment onto the provider while delivering greater agility, more advanced features, seamlessly scalability, and resilience to outages and natural disasters. With less risk, greater flexibility, no end-of-life for the technology, and access to advanced reporting, automation, and mobility, enterprises are free to funnel their resources away from maintaining their technology and toward outperforming competitors.

What are the Benefits of Hosted VoIP?

Your business can realize a huge range of benefits from the use of Hosted VoIP. None more than the fact that you’ll be able to avoid the ongoing expensive investments that come with a traditional, or on-site phone system, communication system. Other benefits of hosted VoIP include:

Tele-communications systems are an essential component of office infra-structure and deciding on a new or replacement system is a strategic investment decision. We’re experts in phone system technology, ready to help you find a solution that will easily scale.

Want to connect employees anywhere in the world through end-to-end communication, while saving a significant amount of money at the same time? SIP Trunks are a smart choice!

SIP, which stands for session initiation protocol, trunking enables your business to operate its phone service through an internet connection. It’s an efficient and cost-effective way to transition your company’s on-premise PBX system to the cloud.

The result? Your business can consolidate its communication systems, realize significant cost savings, easily grow and scale as-and-when needed, gain complete control of your phone lines and minimize downtime to your phone services.

The benefits of SIP trunking are endless! Ask us how end-to-end communications offer strategic advantages to your organization.

Empower Your Employees to Work From Anywhere with Unified Communications

Want a cloud-based communication platform that ensures your employees are more efficient, productive and able to work from anywhere, whether in the office, at home or on a business trip?

Make it seamless for employees to initiate, receive and respond to both customers and colleagues by bringing all communication tools onto one easy-to-use platform.

Bringing a range of products together on one single platform, unified communications integrates communication tools such as instant messaging, VoIP, video conferencing, email, integrated voicemail and SMS all on one user interface.

The benefits of UC are huge, ensuring your team is efficient, productive, collaborative and able to offer world-class customer service no matter where they are working from. Learn more..

Looking to build and maintain a safe learning environment both on and off campus? OT Group uses the GoToConnect Safety suite of integrated communication systems to do exactly that.

Through the combination of on-campus and off-campus tools, GoToConnect Safety features a range of security technologies that are integrated directly into GoToConnect’s cloud-based phone infrastructure - helping your education facility to build safe learning environments no matter where your students are learning from.

We have a range of customizable and highly-effective cloud-based phone and communication solutions that will ensure your education facility is not only secure, but also operates efficiently and saves money at the same time.

Are you a small business looking to sound professional with enterprise features? Does your medium-sized business need work-from-anywhere access to video communications?

Are you looking to centralize the management of your phones across multiple locations? Or do you simply want to significantly cut down those long-distance fees?

Here at OT Group we have the expertise and experience to design a cloud-based phone and communication solution that grows with your business.

Whether you are a small to medium-sized business looking to improve your internal collaboration, an education facility looking to consolidate all communication or an insurance firm looking to ramp up call center operations - we will build a cloud-based phone solution that works for you.

Get in touch with one of our communication experts today for a free consultation. 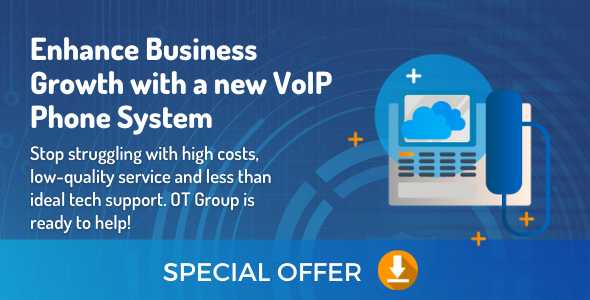 From the sales people to the office staff, the technicians and trainers to the moving people, your employees are professional, hard-working and dedicated to making the customer happy. It is always a pleasure dealing with your staff and I commend you for putting together such an excellent team. 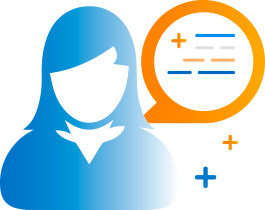